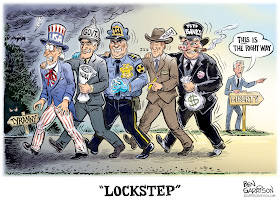 People like Haji Hadi may never get this. While he needs 4 witnesses to prove what Najib did, and only because he wants to be on the side of Najib, we, the people, are not burdened by the unnecessary. We have seen a wheelbarrow full of indisputable facts. Call it a judgement call or whatever, we know we have a crooked prime minister.


With the help of a coterie of Machiavellian- Svengali consultants or just plain macais including the half breed outlaw residing now in Manchester, all Najib does is to do anything to hold on to power. He is only interested to hold on to power, by bending the will of the people. If it’s going to be a test of will power, we will win in the end.


And if he has to be an Islamic purist himself or enlist an Islamic purist wannabe like Hadi, he will. His declaration that he fears no one but Allah will endear him to the Malaysian Islamic purists like Hadi and his followers.
Because it’s fun to be an Islamic purist now- the whole world can be classified as your enemies. The whole world has wronged you and you have earned the right to be angry at about anything. Young women not wearing the headscarves, hapless females easily converted into comfort women, males wearing shorts doing exercises, those not like minded, those opposing Najib. And Hadi is ready, willing and able to dish out suitable fatwas.


What kind of leader is that who can unleash the brutality of our legitimate coercive forces on his own people? Our chief constable stands ramrod at the door, ready to implement Najib’s every twinkle of the eye and the slightest penile sensations.


The answer is a man whose constitution is the same like many dictators in the world- Pinochet, Idi Amin Dada, Marcos, Saddam Hussein, Qaddafi, and Papa doc Duvalier.


Anyone, who may be sympathetic to Najib initially, will in the end, cancel out the sympathy because of his or her inherent sense of ethics. The man actually many things wrong and unlawful. No sense of ethics can agree to that. As for Hadi, his sense of ethics is warped.


He is deceitful and a devious liar. He must be such a person- otherwise how can anyone explain of a person who goes to perform umrah 3 times a year and for the first time in his life, perhaps wears a sarong beneath the robes and participate in a mass hymnisation of the holy Prophet?   Singing Ya Hana Na does not make Najib more Islamic than he is not. He is a bloody hypocrite.


Since 2009, when he took over, amidst the pomposity and grandiose declarations- since then, what we have had, are years of reptilian rule. Slithering and winding and just hissing. Where are the real policies for example for poverty eradication and fair distribution of income? What has happened is the concentration of power and wealth in the hands of a selected few. He came to power, promising heaven on earth for the masses, but delivered those promises to the select few. He still does this.


Every Malaysian must now wake up to the real character of Najib. He is double faced. What has since become tediously familiar is Najib’s faux concern about the poor, the hapless, the houseless, the rest of the population. He expressed sorrowful concern about people living in hovels and unfit housing stating innocently, that he does not know that there are people living like this in Malaysia.


I Najib, son of Tun Razak hereby pledge that no one ought to live like this, I shall now pledge to prosper these people. I serve the 30 million Malaysian citizens.I am no Mahathir's stooge.


And then he approves the construction of luxury housing and does nothing to stop the prices of houses from being manipulated by housing developers. He allows for the JVs with companies building the now familiar and luxury sounding ‘lifestyle accommodation’ while still mouthing his false concerns for the welfare of the ordinary people.He allows for the demolition of our national museum to make way for upscale condominiums. He approves of a project to break our our national monument. what kind of person obliterates the country's sense of history?


Najib and his Svengali advisors- second rate ministers made to look credible only because of the power of their offices where in actual fact, they are mental gnomes, paid writers and hired journalists, will react with extreme indignation when confronted with facts. The minion of a chief minister described the disclosure of the DOJ, as an attempt by the Americans to kill Malays. Najib, he says is God’s gift to Malaysia. Ismail Sabri, how stupid can a lawyer be- says America wants to go after Najib because he is a Muslim. And the MP from Kuala Selangor says, since the DOJ has not said to whom will the seized property and assets be returned, says that omission is to be taken to mean the DOJ efforts are flawed.


Can we see how Najib insists his sycophants march in lockstep in his diabolical ways? The pronouncements and statements by these sycophants have become standardised and so predictable.


We must continue to be disgusted at Najib’s shameless gall. The one deserving persecution is the embezzler-in-chief and the hustler from Pekan.
Ariff Sabri at 08:26
Share